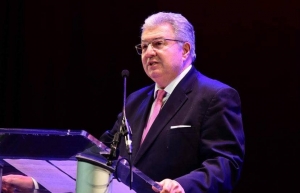 Your invitation is an immense pleasure and privilege. It is an honor to address a message to the 3rd Diaspora Conference on the National Sorry Day.

Every people, in every place and every civilization creates, develops and lives by principles and traditions, customs and systems of values, in order to ensure its overall existence in the world; systems that constitute its tribal, national or cultural identity.

Civilizations progress, develop and move forward, are able to achieve more and go higher, when they get in touch with other civilizations. Through common virtues and experiences or under similar historical circumstances, that may bring together peoples who may seem incompatible at first sight, it is very probable to obtain a proximity that contributes to mutual understanding and thus to fruitful exchanges. At least, this is how it should be. History, however, as often as not, has taught us that interaction and exchange have been based on enforcement, converting and conquering efforts, fear of what is different or unknown and not based on respect and mutual understanding.

May I dare to say, that both Greek and First Indigenous Australians, two of the oldest civilizations on Earth, share, throughout their history, the experience of such forcible encounters. We, therefore, salute today’s celebration of the Sorry Day.

Unlike civilizations which have remained isolated and remote, because of unfavorable conditions, for instance geographical obstacles, the Greek civilization has been fortunate enough, since ancient times, to flourish in various fields: art, science, philosophy, spirituality, commerce.

The restless Greek spirit developed and shaped ideas and values, universal as they may be, to prioritized systems, suitable for the organization of society and the orderly existence of human relations. These values have been forged through Time and History, remaining imperishable, ecumenical and timeless. They have been expressed and communicated via the Greek language, supported by the Greek-Orthodox tradition and expanded to the whole world through the Greek Diaspora.

As I often like to say, wherever there are Greeks in the world, there is a miniature of Greece. The values that have nourished them are deeply rooted in their hearts. Because of them, they have become active members in the receiving societies and acclaimed citizens in art, politics, science, trade, sports. They impart their spirit and education to their new countries. It is an ecumenical duty of theirs to preserve this gift and share it with the world, through their creativity, talent and hard work. Our century is a time of Brain Drain and Brain Circulation, a time of information and networks, where Diaspora can be a bridge of knowledge, specialization, nets, resources and markets. The Greeks abroad in their majority are for spreading the Greek civilization worldwide in all its aspects.

For this reason, we consider the collaboration and interaction between Charles Darwin University and the Greek Universities of Macedonia and Aegean as absolutely auspicious. I wish the Conference a huge success and I am looking forward to the results. Going quickly across the abstracts, I feel certain that many tremendously interesting issues will be discussed, viewed through the prism of synchronicity and timelessness, issues concerning various aspects of the life of the Greeks in different parts of the world, different periods of time, in a cultural, historical and interactive level.

Hellenic Republic has been and is supporting every act of promoting mutual respect of traditional cultural identity of all peoples and mutual understanding through intercultural dialogue.

In the General Secretariat of Greeks Abroad and Public Diplomacy of the Greek Ministry of Foreign Affairs we stand for the Greek Diaspora in every part of the world. We support any initiative that may showcase it as the main index of Greece’s gentle power and we assist it in projecting the Greek language and the Greek-Orthodox tradition, through a plethora of actions. We assist the Greeks abroad in order to preserve their identity and cultural heritage; a heritage that advocates the peace in the world.