Rector of the University of the Aegean 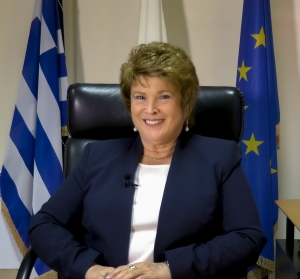 As Rector of the University of the Aegean, it is with great pleasure that I welcome you to the 3rd International Conference “Perspectives on the Hellenic Diaspora”, which our university is co-organizing with Charles Darwin University and the University of Macedonia.  This conference reinforces the collaboration between the three universities, but also stresses our academic interest in the Greek Diaspora and support for First Nation Peoples around the world and in Australia.

The University of the Aegean, which was founded in 1984, aims to introduce new approaches in higher education in Greece and worldwide and to promote regional development. As our university is situated on six islands in the Aegean (Lesvos, Chios, Samos, Rhodes, Syros, and Lemnos), migration and diaspora are issues of pivotal importance, due to the history of migration from these islands to other countries, including Australia, but also pose contemporary challenges due to the influx of refugees to the islands in the past few years. In both cases, the University of the Aegean aims to provide support through educational programs and activities.

Collaboration between the University of the Aegean and Charles Darwin University marks a fifteen-year span, which began in 2007 when a collaborative initiative was signed between the two universities. One year later at the School of Humanities of the Aegean University in Rhodes, Greece, as vice rector of the University of the Aegean, I co-signed the memorandum of understanding between the two institutions.  This agreement led to strengthening of collaboration between our educational institutions and promoted new teaching/learning methods and technological tools for Greek language education in the diaspora. When the first CDU Greek In-Country Study Program began in 2007, it was embraced by the academic staff of the University of the Aegean, who offered expertise in second language teaching/learning and new technologies, but it was also supported by university students from the School of Humanities who took part in the teaching of Greek to students from CDU. I am pleased that this collaboration continues to this date. In 2014, a new memorandum of understanding was signed, which also included the University of Macedonia. Two conferences on the Greek Diaspora followed in 2017 and 2019, which led to an interchange of academic expertise about Greek language education around the world and created an active network of colleagues from the three organizing universities, as well as other universities.

One of the main purposes of this third conference is to bring together world-wide expertise on the Greek diaspora; therefore, an effort was made to invite speakers from a variety of countries around the world, who have extensively supported Greek language studies and who have approached migration from an interdisciplinary perspective, focusing on historical, cultural, community, and ethnographic orientations and methodologies.  The educational network, that will be created through this conference, begins with academics who have already made their mark on Greek diaspora studies over the years and expands to young persons, e.g. post-graduate students, who are at the onset of their educational journey.

Rector – University of the Aegean, Greece