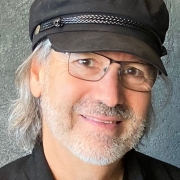 This paper examines the presenter’s journey into researching the story of his dad’s father Soteres, a refugee from Kastellorizo, Greece in WWI. Soteres came to Australia in 1915, worked on a Northern Territory railway and saved enough money to buy land and bring his family to Darwin. The family was only able to come through the assistance of the Australian and British governments, who sponsored an extraordinary rescue mission, sending a ship through Turkish bombardments to bring Kastellorizians to Australia. In the years that followed the Kafcaloudes family built a pioneering construction business that constructed some of the landmark interwar buildings in Darwin. The presenter will outline his research methodology and will discuss the difficulties in finding facts and the problems of relying on oral histories.

This paper examines the presenter’s journey into researching the story of his maternal grandmother, a spy in Greece in WWII. Olga Stambolis married a Kastellorizian man in 1921 and together they raised a family in Sydney. During WWII she was trapped in Athens and was recruited to be a spy, rescuing Australian, British and New Zealand airmen caught behind enemy lines. While she was working in Greece, her husband in Australia had her declared dead, remarried and had two more children. Although caught by the Germans, she survived the war and returned to Australia in 1952 to reunite with her four children, one of whom had married into Darwin’s Kafcaloudes clan. As with his other paper for this conference, the presenter will outline his research methodology and the difficulties in finding facts and discussing the problems of relying on oral histories.

Biography Dr Phil Kafcaloudes is an author and broadcast journalist who presented the breakfast program on the ABC’s Radio Australia for nine years, broadcasting across the Pacific and Asia. For the ABC he worked in 12 countries and hosted the corporation’s first English language program from China. For a Churchill Fellowship, he studied journalism trauma training worldwide. In 2011 his third book, the novel Someone Else’s War was published in Australasia and translated into Greek for Europe. It tells the story of his grandmother who was a spy in Greece in WWII. His PhD looked at oral history storytelling which involved adapting the novel into a play. Phil has also taught journalism at La Trobe University and at RMIT where in 2019 he produced the first national TV election program presented entirely by students. This program earned Phil the inaugural teaching award by the Journalism Education and Research Association of Australia. He has been commissioned by the ABC to write the history of Radio Australia. This book will be published in 2022.